Firstly Chairman Mike Wilkes collected the Henderson Rose Bowl for the League's most improved Club (see picture above), an accolade reflecting the club's successful playing season as well as progress made off the field with the state of its facilities, coaching, etc. 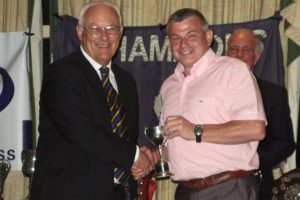 The Over 40's team picked up the trophy for winning their regional league for the second year in succession, and this year they also won the competition for the regional winners.

In the Players of the Year awards, selected by the teams themselves, Rick Halkon came runner-up in Division One with his amazing record haul of 79 wickets, losing only to Marple's overseas player Dom Michael.

Mentioned, but not awarded at the Dinner, was Sale's winning of the 2011 Cheshire Shield. 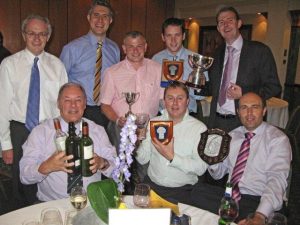