On behalf of the club we are all very sorry to hear that S J Asher passed away following a short illness on Sunday, he was just 56, our thoughts are with his family.

He also served at honorary secretary 1995-96 during which time the club moved from the Manchester Association to the Cheshire County league. 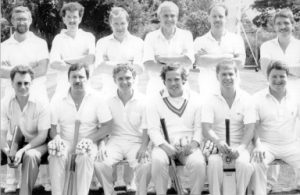 He was a member of the 1990 Manchester Association 1st XI 2nd division championship team (above - front row, third from left).

A club legend on and off the pitch who had plenty of good stories to tell.