It is with great sadness that we learnt of the passing of former club president M G Roberts on 18 October at the age of 72.
Glyn made a major contribution to the club as a competitor, coach, official and administrator during the last 50 years.
He joined the club as a cricketer in 1968 after moving to the area from Somerset and was an outstanding all-rounder.  Over 27 seasons he scored 6,651 runs and took 432 wickets in 1st XI cricket, his run scoring is a post war record. He also captained the club over seven seasons between 1976 and 1984.  When asked about his captaincy he stated, “well when nobody else wanted to do it I stepped in”.  He took on the 3rd XI captaincy in similar circumstances between 1999 and 2001. 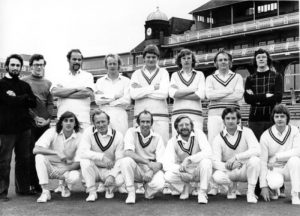 The highlight of his playing career was the H C Smith cup final played at Old Trafford in 1974, a game that Sale won by one run (front row, second from right).  Glyn took 1 for 22 off 10 overs. He was also a member of the division two championship teams of 1980 and 1990.
Glyn topped the 1st XI batting averages in 1969, 1972 and 1981. His best season was 1985 when he scored 667 runs, including his highest score for Sale of 111 not out against Earlestown (one of three centuries he scored). As a bowler his most successful season was in 1982 when he took 36 wickets, including his best return of 6 for 21 against Bury, although in 1992 he had the remarkable figures of 3 for 1 off 8 overs against Flixton.
He is thought to hold a unique record of scoring back-to-back centuries in a single weekend, for Sale on the Saturday and the Manchester & District representative XI on the Sunday.  He played for the League team for several years, helping a number of younger players to develop and go onto represent Lancashire CCC.
He also served as the Manchester Association Treasurer between 1985 and 1996, the year that Sale joined the Cheshire County Cricket League.
At the club’s 150th anniversary dinner where Glyn spoke about the great players who had represented the club (see picture above) his great friend Russ Wyatt described him as “a better player than he thought he was”, perfectly reflecting both his humility and his talent.
Glyn was also a qualified cricket coach and for over 10 years coached and organised the junior cricket section on a voluntary basis, passing on his knowledge and developing a number of cricketers who are still playing for the club today.  Inspired by his commitment several of these cricketers have gone on to train and develop as cricket coaches themselves.
Upon retiring from playing Glyn qualified as both a cricket and hockey umpire, he was well respected and was appointed to the elite Premier League panel of the Cheshire County Cricket League.
As an administrator Glyn was a committee member for countless years, including 13 as an active President of the club. In his time the club adopted the title “Sale Sports Club” and made significant progress as a community sports club including major investments in the Cricket and Tennis facilities as well as achieving Clubmark accreditation for the first time, assisted by Glyn who has added the role of Child Welfare Officer to his long list of voluntary posts over the years.
His retirement from the presidency coincided with him winning the Trafford Unsung Hero in Sport award for 2009 in recognition of the major contribution he had made over the previous 40 years.
Despite stepping back from his commitments he remained a fixture at the club was always on hand to help out when requested. In 2014 he was appointed a director of The Sale Cricket Ground Co Ltd and more recently he joined the fledgling board following the club’s move to become a Community Benefit Society.
This allowed him to take on the role of Honorary Secretary of the Cheshire County Cricket League Umpires Association from 2010 to 2018.
He also served as a Governor of a local school and was an accomplished singer, performing in three local choirs.
Glyn’s three children all went on to represent the club at Cricket and Hockey, unsurprising given the countless hours they would spend at the club in their early years.
Glyn will be missed by everyone at the club, a true gentleman.
Rob Moore
cricket, news, Obituary
Obituary
No comments
222
0
0