The development of a community sports hub for Sale reached a key milestone this week as local MP Mike Kane broke ground on the construction of Sale Sports Club’s new clubhouse.

Trafford Council granted planning permission for a 2-storey community clubhouse and pavilion and a new indoor tennis centre in February.  Since then work has gathered pace culminating in the start of building work this week, with construction expected to be completed by the spring of 2019.

The new clubhouse will deliver Sport England compliant changing facilities that are accessible to all and an exercise studio, as well as providing a first class viewing vista from a bar and function room on the first floor.

The new facilities will allow the club to broaden its appeal and contribute to the health and well-being of local residents by working with other local organisations to target those who will benefit from increasing their physical activity rates and reduce social isolation.

Mike Kane wished the club the best of luck, “It’s great to have the relationship with this club. I’ve seen the plans and they’re world class, it’s going to be so exciting”.

“Clubs like this build so much solidarity in communities, being a member of a club improves people’s health and their outcomes and that’s why this type of development is so important.”

Local councillor Jane Baugh was also on hand to hear the club committing to do more for children’s services in the area, as well as increasing activities for all age groups.

The club, founded in 1854, is funding the redevelopment through the sale of surplus land for much needed local housing.

Steve said, “This project has been a long time in the making, so thanks to Darren.  He has been involved from the start, has been good to his word and great to work with, as have Brierstone”.

Club President Matt Whiteley concluded by praising the enormous amount of work a number of volunteers have put in to get the project to this important stage. 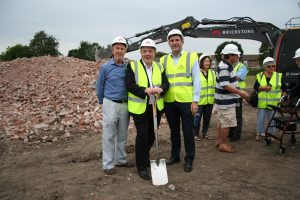