Sale Under 16’s completed an impressive league and cup double after winning the cup final the week before.  Sale needed to win their final game of the season against Radcliffe to clinch the title by 2 points from Monton and Weaste of the Central Lancashire League.  Fellow Cheshire County League outfit Urmston finished third.

Captain and wicket keeper Dan Osborne finished leading run scorer with 459 runs and has now passed 1,000 runs for the season in all competitions.  Joe Cannon was the leading all-rounder with 224 runs and 14 wickets, Sam Battersby scored 227 runs and Gabe Smith took 11 wickets. 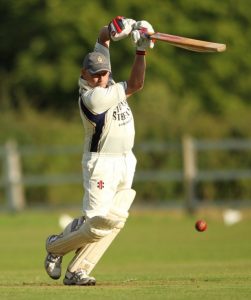 Iain Harrop (pictured above) led Sale Silverbacks to their third divisional title in 8 years, with one game still to play.  Second placed Cheadle Hulme cannot catch the Over 40’s side after Sale won in a tight finish at Bowdon Vale.

The Silverbacks have won 10 out of the 11 games played and now meet the runners-up from the South East division for a place in the county finals day.