Sale Cricket Club secured its first trophy of the 2015 season on Tuesday with victory in the Salford Youth Cricket Association Under 16's Cup Final.  A sizable crowd gathered at Sale’s Dane Road ground to see the home side defeat Radcliffe of the Central Lancashire League by 5 runs.

Search sponsored Sale won the toss and chose to bat first.  They got off to a flying start as Sam Battersby scored a rapid 28 off just 18 balls.  Three quick wickets for Radcliffe, including the dangerous Dan Osborne for 5, reduced Sale to 58-3 in the 8th over. A crucial partnership of 50 between Joe Cannon (33) and Will Radcliffe (31) then steadied the innings and kick-started the acceleration of the closing overs that took Sale to a competitive, but not out-of-reach, 127.

Radcliffe were soon in trouble against tight bowling from Mal Clarke (1-14) and Tom Kellett (2-9). The game looked beyond them at 14-3, but a partnership of 62 between Callum Malcolm (42) and Ryan Williams (33) kept Radcliffe in touch going into the final overs. A combination of smart fielding, which brought about three run outs and calm bowling at the death by Gabe Smith (2-11) and Tom Gill, who was entrusted the final over, delivered the 5 run victory. 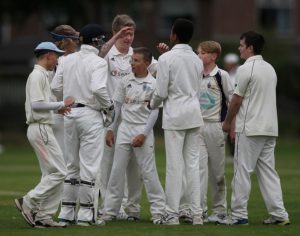 Daniel Osborne, Sale captain and lynchpin behind the stumps, accepted the trophy. His team now have two crucial matches to achieve a league and cup double.

After the game Sale Chairman Paul Battersby praised Radcliffe for their efforts and complimented both sides for playing the game in the right spirit, as well as thanking all the volunteers who help run the junior sections at both clubs.

The win was testament to the investment Sale have made in junior cricket and improving their facilities in recent years.  The club has over 100 boys and girls competing in 8 teams from under 9 to under 16.  A number of the Under 16’s squad are competing regularly in senior cricket in the Vivio Cheshire County Cricket League.

The full scorecard can be found here. 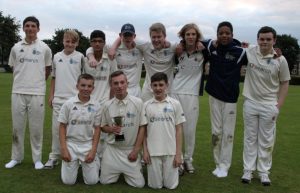